a project curated by Nicola Genovese

With the support of PRO HELVETIA

Identity, as Francesco Remotti says in his book L’ossessione identitaria (The Identitarian obsession), is a dangerous concept, the harbinger of adverse past events but also a necessary principle to give boundaries and meaning to a world that is running and changing too fast.

Identity is absence of changing, poles apart from the notion of alterity; it is the will of remaining identical to one’s own group of reference during the centuries, but also innermost necessity, essential impulse, the urgency of myth of C.G. Jung.

Race, religion, language, gender, fashion, everything could become an identity-maker. It is possible to build an identity just through typical dishes, transforming them into banners, even though they are industrial products realized in another territory, sold as apparently traditional products.

Myth of originality lives through a fake archaic image, becoming a product for consumers in the grip of emotional emptiness, looking for the smell of their grandmother’s cake when they were children.

The ‘double absence’ (quotation from the book of Abdelmalek Sayad), is the state of limbo of a person who leaves his birthplace and is not able to integrate himself in the country where he hoped to be welcomed; it is that state for which you feel to belong to other historical ages or other cultures, living in a constant uncomfortable double unsuitableness. The ‘double absence’ refers to identitarian landscapes, embezzling and ancestral lures.

The project sees the temporary transformation of an artist into a curator, who decides to collect in an exhibition the work of other artists, met during an artist residency in Zurich. Their research paths mingle together and cross-refer from artists to curator and vice-versa, becoming continuation of one to the others.

Switzerland, place where the project comes from, represents the perfect paradigm to develop reflections on identity boundaries, among multilinguism, blurred stereotypes and new forms of immigration.

The exhibition shows the individual approaches to the identity issue, through photographs, sculpture, performance and video. Each artist contributes to the reflections on the couple identity/alterity, between returns to the origin and escapes overseas; between the need to have stable roots in a birthplace and the total denial of one’s own source country.

Sabine Troendle (Basel 1971) presents a photograph, part of a wider work developed during a long period in Texas. The artist proposes a self-portrait where she wants to look like a cowboy. Texas becomes ideal and mythological place of the metamorphosis.

Georgette Maag (Zurich 1955) presents a video shot in the Alps and a performance where she rehashes the most atavist Swiss tradition through the Appenzel’s Jodel.

Oppy De Bernardo (Locarno 1970) presents a sculpture, the cast of a traffic sign that delimitated the Italian ill-famed neighbourhood of Locarno. Nowadays the neighbourhood is perfectly integrated into the city.

Aldo Mozzini (Locarno 1956) printed on felt some images of granite walls of houses in Ticino, alternated to bad words in Ticino dialect. Affectionate insults from the artist’s grandfather when the artist was a child. 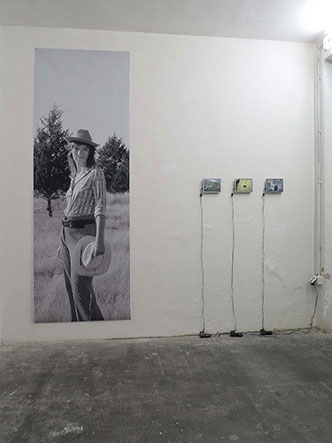 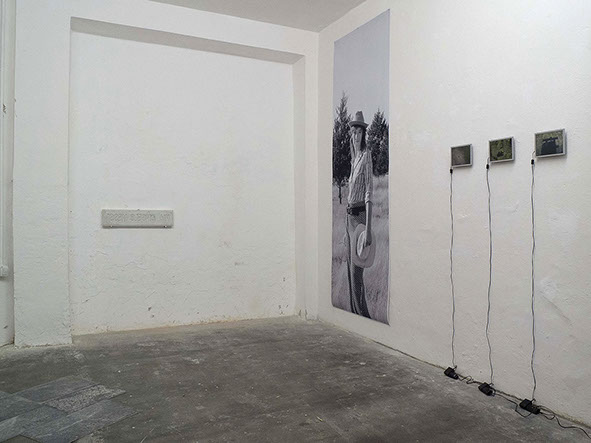